Bioelectricity is tied to brain function but it’s also what allows your heart to beat and your muscles to contract and in a sense it’s at the core of what it means to be alive. I was really taken with this idea and as a starting point for new work, I wanted to reference how most of us have a pretty basic understanding of energy in the world around us, let alone inside of our own bodies, and I began fabricating generic household electrical plugs out of cut and layered plywood. As the installation evolved, I worked to suggest a feverish sense of immediacy and vitality, as if the work was electrically charged and coursing through the exhibition space. 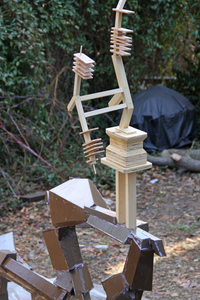 The work was also influenced by Anthony Atala’s TED talk on the 3D printing of a human kidney, where raw tissue serves as a biological scaffolding for the patient’s own DNA. I loved this idea of a biological scaffolding and I was thinking about this in relation to my cut paper drawings -thinking about depth and structure in relation to the biological and what’s beneath the surface of living systems. With this in mind, I wanted the forms in this series to suggest a sense of geometry and an inherent structure to the way things grow - that there are mathematical relationships at play on a microscopic level. 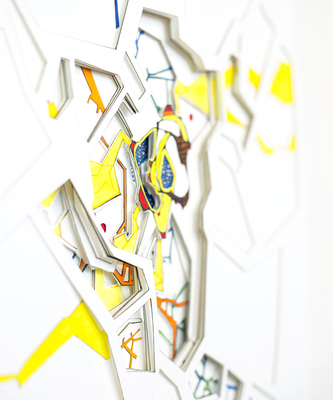 I developed the Ignition Sequence series from 2013 to 2014. Materials include chipboard, epoxy, foam, paint, rubber, wire, and wood.
Loading...