JACKIE BROWN
JACKIE BROWN
3D Printed Objects
This series also started during a residency at the European Ceramic Work Center in 2018 and is an ongoing project. Each object originates from the same source – an olive tree that dates back 1000 years. I used Agisoft PhotoScan to synthesize images of the tree into a 3D model using photogrammetry. I then altered the 3D model using Rhino and Slic3r software to produce a variety of related but distinct forms. As with the Brain Fruit series, I was intrigued by the idea that this one simple starting point could be the foundation to a whole host of forms and possibilities. 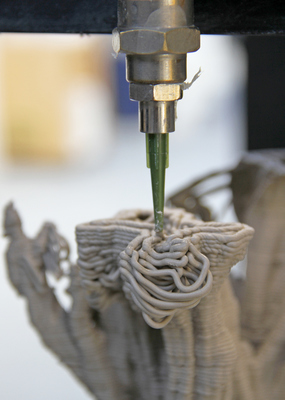 As I experimented, I became particularly interested in the anomalies and imperfections of the printing process. I also embraced the potential to combine forms together while the clay was still malleable and to fuse parts together during the firing process. I love the idea that creative technologies are just one step in the process and that I can continue to combine and alter the forms through multiple stages in the evolution of the work. I am continuing to engage this process with a small PotterBot 3D printer back in Maine and plan to explore the sculptural applications of this further over time.
Loading...