JACKIE BROWN
JACKIE BROWN
Aggregate Series
This series of small ceramic sculptures started during a residency at the European Ceramic Work Center in 2018 and is an ongoing project. On a basic level, the forms are a way of exploring growth and change – processes that have been at the heart of everything I have explored as an artist. The work is also a departure from large-scale installation and a chance to relish the challenge of making small, well-crafted and visually engaging objects. 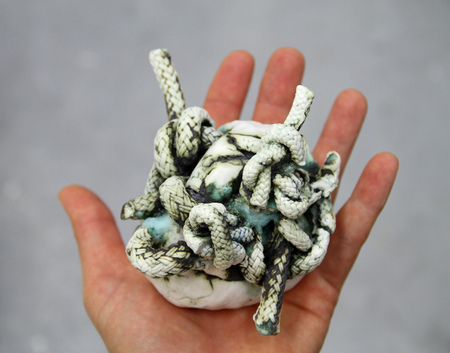 The forms initially stem from the way that clay is a shapeshifter – a material that morphs and molds and mimics its environment. An early catalyst for the project was also an interest in rope as a historical object and a love for its physicality—the way you shape it with your hands and the way it functions as a tool for holding things together and tying things up in knots. Using this familiar reference as a touchstone, along with recognizable elements from the natural world like vines and branches, I aim to explore human nature and ways that we try to control natural processes, both fostering and restricting growth.